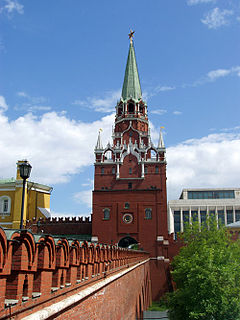 The image is the Spasskaya Gate at the Kremlin. The question is whether there is a political scandal in the United States regarding intervention in the 2016 elections by the Russians.

What the Russians almost certainly did is to hack the Democratic National Committee’s email servers, download information, and then release it to the public for the purpose of embarrassing the Clinton Campaign. If you want to investigate that question, I suggest the book, “The Plot to Hack America: How Putin’s Cyberspies and WikiLeaks Tried to Steal the 2016 Election” by Malcolm Nance.

What is less clear at the present is to what degree, if any, the Trump campaign was involved. The fact that Trump Campaign apparatchik, now US Attorney General, Jeff Sessions had contacts with the Russian Ambassador (considered by some to be Russia’s top spy in the US) and then lied about it to Congress seems troublesome. It is also troublesome that the FBI, whom Sessions oversees, has been less than forthcoming to the Congressional committee that is going to investigate the Russian hacking.

I cannot help but see emerging parallels with the Watergate scandal, where government officials lied, and Nixon tried to sabotage the investigation of the Watergate burglary, which was also an attempt to use illegal means to gain information useful in an election campaign. Donald Trump spreads fake news about the question, but has not quite passed over into obstruction. [This article was originally written before Trump fired FBI director James Comey strengthening the parallel to Nixon who fired the Watergate special prosecutor.]

We are at a very early stage in the process of getting to the bottom of the story, and not quite to the point of asking the question: “what did the President know, and when did he know it?”